You’ve decided that you are ready to enter the social media marketing arena but you are not sure where to go. If you select Marketeer Choice to get you into the networks then below are the communities that you can be a part of.

Facebook is actually an intricate combination of hundreds of separate networks based on categories such as schools, religion, place of residence. However, most people choose their “friends” through people that they know, 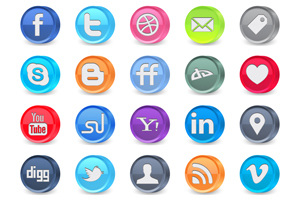 or friends of actual friends. Not too confusing, is it? Facebook first started as a young network that focused primarily on college students but it later opened up to the general public and its monumental growth began. Users can add pictures, comments, photos, blogs, and other media through their profile. It also has great options for customizing privacy based on your preferences.

Twitter is a free service that combines social networking with texting by allowing users to post messages that are limited to 140 characters or less. These messages are known as “tweets.” Twitter’s service works well with mobile devices but can also be used easily on personal computers. Twitter users also have a personal web page that can be viewed on the internet, and tweets can also be restricted based on privacy preferences.

YouTube is the most popular online video website for the public in the world. People and businesses come here to watch and also share videos that span just about every subject you can think of. YouTube is accessible via mobile devices and personal computers, and users can sign up for accounts that they can use as channels to publish their video content.

LinkedIn is a professional network that boasts over 120 million members and is growing very fast. The site connects users to contacts and is a portal for professionals to share ideas on business, jobs, and other related information.

Flickr is a site that started as a image and video hosting website and has now grown into a community that also offers other services. Bloggers use this site to host images for their blogs and other people use it in the same fashion. Businesses also use the site to store images for customers to see.

Google+ is an innovative social networking website created by the search giant. It is very similar to Facebook but it provides options to users to create “circles” in which they can share certain information without having to worry about it being disclosed to people that it may not necessarily be meant for. It works off of networks just as Facebook does and also allows for photo sharing and comments, as well as offering other groups.